What Questions Must be Asked & Answered, Before Creating an MG/YA Book Cover?

Part 2
by Aidana WillowRaven
In my first post on this topic, I touched on the fact that basic cover design rules tend to remain the same from cover to cover, title to title, genre to genre. But we need to remember there are some important differences, too.
To repeat the opening paragraph from part one of this topic: When contemplating what is needed for the cover of any given book, some basic rules apply to every design or composition. You need to know what the title is saying. You need to know what the title isn't saying. And you need to know to whom the author is saying or not saying the title.
Last week, I started my example using an Easy Reader cover. Today, I'll be showcasing an MG/YA (middle grade, sometimes also considered "tween"/young adult), in my example. Let's ask the same questions with an MG/YA cover I designed.
What is the title saying? What isn't the title saying? Who is the author saying it to? (I’ll be using 4RV Publishing’s Just Breeze by Beverly Stowe McClure, for the example). 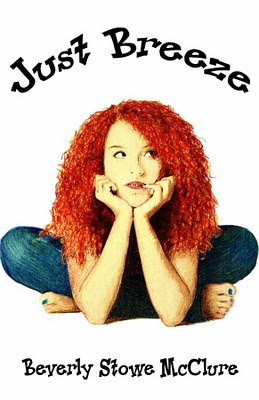 What is the title saying? Just Breeze, hmmm. 'Just' anything hints to the idea of commonness, normalcy, nothing special or extraordinary. But, would there even be a book about something that was 'just' anything? Especially a breeze? Regardless of what the story is about, it needs to be, well, 'just' a cover. So, I kept the background plain. But how do I make a plain background interesting? I decided to position the character in an unusual pose and have her acting bored or distracted. It makes the viewer want to know what she is thinking about. It gives them a reason to open the cover and look inside. I even have her eyes leading the viewer towards the opening edge of the cover.
What isn't the title saying? Here is where little hints about the story comes in. But unlike with the children's book I discussed last week, where the only real hint was the giraffes, there are several hints about what is to be discovered inside. This is targeting an older audience, 10 to 14-year-old’s. It needs to be a little more complex, while still remaining simple, or 'just.' Breeze is really the main character’s name. The story isn't about a type of light wind at all. It's about Breeze, the girl. So naturally, she has to be included on the cover. In order to maintain that lonesomeness, or singleness that 'just' implies, I drew only her. Not her friends or family. I also used a font similar to varsity or junior varsity lettering to show a lot of her life and self image revolves around school and her friendships.
To whom is the author saying the title to? As I mentioned above, the book is targeting 10-14-year- old’s. More importantly, the book is targeting girls. Girls who feel 'just' anything. Just plain, or awkward, or too tall, or too short, or .. well … just about every 10-14-year-old girl out there. They feel alone; they feel isolated; they feel plain. Breeze thinks her hair is too wild, too red. So the hair was a major element that needed close consideration. Breeze wears braces, braces with blue rubber-bands (which also matches her blue finger and toe nail polish). She's different. But the final hint about the story is that she's gorgeous! I didn't draw an awkward, gangly, pimply, messy-haired kid. I drew her precisely how everybody else sees her, but herself. She's beautiful. That is the most important part in the portrayal of her character.
Next week, we'll look at a more advanced read/genre, a mainstream novel. (I’ll be using 4RV Publishing’s Stolen by Vivian Gilbert Zabel, for the example).