'The Story,' as it applies to Cover Art and Illustration.

by Aidana WillowRaven
Not too long ago, one of my fellow contributors for the 4RV Reading, Writing, & Art News blog, Karen Cioffi, posted an article titled: Book Promotion: The Foundation. In that post, she has a sub-topic I thought could also relate to another way a cover artist or illustrator could, maybe even should, approach the visual interpretation of a manuscript.
The sub-heading I'd like to look at is: The Foundation: Create a Quality Product. Below that, there is an even narrower focus: A. The Story. To quote Karen ...
To see how I'd relate this to approaching a piece related to almost any genre of book, I'll attempt to explain how these elements can be seen in my most recent work, commissioned for a book trailer, since the book itself has a more abstract cover theme. 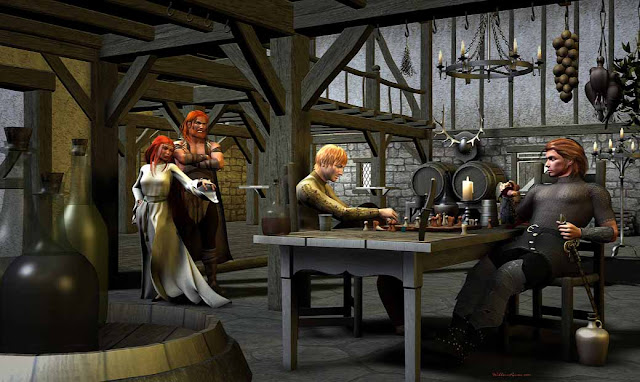 The above illustration compliments Harry Gilleland's Aldric & Anneliese. As you can see to the left, the cover alone wouldn't really say much in a book trailer, unless I could endlessly search for stock imagery that just happened to resemble the characters and period of the story (6th century, Anglo-Saxon Europe). The book itself has no illustrations. So, I had the wonderful opportunity to create a few images to represent the book for its promotion.

So let's start ... there are five major elements of a story: characters, setting, plot, point of view, and theme ... In writing, these are most likely very different than what I am about to do, but just as important from an artist's, specifically an illustrator's, POV (point of view). 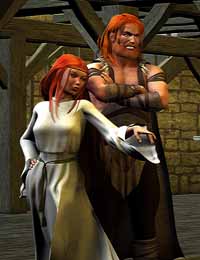 Characters: The illustration shows four of six major characters in the book, and no minor characters are shown. Whom I chose to portray, vs. whom I didn't, was chosen very specifically. Even who I placed where, what I have them doing individually, even who I focused lighting on was all planned out. Each character has to be a clue, not just aesthetically pleasing. The positioning, the postures, the gestures, the expressions ... What are they telling you about what you will read in Aldric & Anneliese? Clothing variances ... clues. Hair styles and colors ... clues. Even skin tones were carefully chosen.You want to give the viewer just enough to get them interested, but not enough to give away the plot.

Setting: Look around the 'room.' What do you see? What don't you see? Everything in the image means SOMETHING, hints at SOMETHING. And not necessarily a specific event or scene. In this case, the scene is contrived. No where in the book is this specific scene described. Although that's normally what I do, illustrate a specific scene, this time I wanted more of a general story, while wrapping it into a plausible scenario. I took great care to make the building look authentic, also. If I'd have put these characters in a modern building, it would have looked like a play, not reality. The furnishings, the props, and the lighting has to fit the book's theme and content.

Plot: Here is the fun part. When looking at a scene's plot, I get to delve even deeper into the characters and the story. The chessboard, the wine bottles, the map, even how the map is held in place tells more about the story and personalities of the characters, what moves the story forward. These are clues that may never be mentioned specifically in the book. But as you get to know a character, you get a feeling about things they may do during the course of the story. Things the author didn't mention, but would be something the character would do. This is where your individuality as the artist can be expressed best, because it didn't come from the book at all. It came from the artist, alone.

POV: This is where you may see a big difference in how POV to an author vs POV to an artist differ most. The point of view is something I often like to play with. By placing the table at an odd angle, and choosing who sits or stands where, I can tamper with what characters get more focus than others. I also can draw the viewer into the scene, like they are right in the room, by placing a simple barrel holding a few bottles close to the bottom edge of the scene, making it appear to be right in front of, or beside, the onlooker.

Theme: Very important. Do your best to be accurate to the period. Pretend a historian might pick it apart as to what is fantasy vs reality. (Here, I deliberately incorporated some fantasy, for interest reasons). Do some research of the period and region to stay true to the book's general theme.

As you see, even though an illustrator or cover artist looks at manuscript elements a bit differently, they are just as much key to a well developed piece, that is meant to represent any book, either symbolically or literally. And of course, if the writer doesn't flow their own version of these elements, it makes it that much harder on the artist. It's a team effort.

Tell me ... What do you see in this image that gives you clues to the book?


Art Director & VP of Operations
4RV Publishing
Posted by Aidana WillowRaven at 9:30 AM