What Questions Must be Asked & Answered, Before Creating a Novel Book Cover?

Part 3
by Aidana WillowRaven
In my last two posts, the topic has been on how basic cover design rules tend to remain the same from cover to cover, title to title, genre to genre. But, we need to remember there are some important differences, too.
To repeat the original post's paragraph on this topic: “When contemplating what is needed for the cover of any given book, some basic rules apply to every design or composition. You need to know what the title is saying. You need to know what the title isn't saying. And you need to know to whom the author is saying or not saying the title.”
So far, I've used both an Easy Reader and a MG/YA cover as examples of the points being made in this topic. Today, I'll be showcasing a mainstream novel as my example. Let's ask the same questions with the cover I designed.
What is the title saying? What isn't the title saying? Who is the author saying it to? (I’m using 4RV Publishing’s Stolen by Vivian Gilbert Zabel for the example). 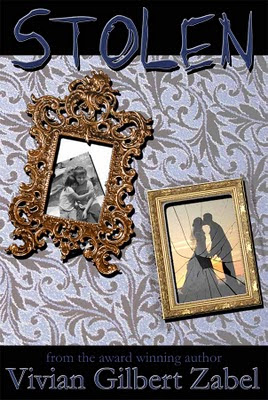 What is the title saying? Something has been 'stolen,' obviously. Judging by the font, there is a frightening and chaotic, almost violent mood implied. Since the title is so basic and short, and a little intense, we’re going to have to look at what isn't the title saying to get more clues as to what we'll find inside the book.
What isn't the title saying? Although there are not that many elements on the cover, it is telling us loads of information, giving little hints as to what has been 'Stolen,' and surprisingly (if you pay attention), from whom and where. First, if you look at the 'ground,' you get the hint of wall paper ... of an older style. So this is an old fashioned home, most likely. Second, the wall photos that are askew show us that there has been a struggle or conflict. This conflict, whether it was physical or emotional, is emphasized with the broken glass in the right frame. That frame is a clue in and of itself. It is telling the viewer that the seemingly happy union has been broken, destroyed, shattered. Let's look at the other frame for the third clue. The image is falling from the frame. The siblings are clinging to each other and seem to be at a public place, like a park, as they are being seemingly ripped from the safety of the very ornate frame. The children are represented in a black and white photo rather than in living color, almost like they are a memory rather than in front of us. Even the fancy frame for the kids, vs the more modest frame for the wedding couple, tells us that the children held the primary love and focus of the characters in the book. As you can see, there are a lot more subtleties to an adult novel cover design than that of a child's book or even a young adult book. Even the book's colors a representative. Blue is the author's favorite color, and the book is a fiction based on true events that happened in the author's life.
To whom is the author saying the title to? Any parent or grandparent, especially a mother or grandmother, are going to immediately key into this cover. It's attacking one of their basic fears and doing it in a seeming 'safe' environment. This is a marriage and family destroyed at the home level. It's personal. It's emotional. It's tragic. The title and cover are warning people to fear what they fear. That monsters are real and that they live in our walls. They come into our homes and the steal our lives, our souls. They try to, anyway.
Next week, the topic will be: 'The Story', as it applies to Cover Art and Illustration. (I’ll be using a promotional piece for 4RV Publishing’s Aldric & Anneliese, by Harry E. Gilleland, Jr, for the example.)