Sometimes less is so much more when it comes to your book's cover.

In both my freelance experience and experience as art director for 4RV Publishing, I've noticed a disturbing trend. For some reason, authors try to cram as much visual stimuli as possible in their cover, every last detail based on the words they so carefully orchestrated. 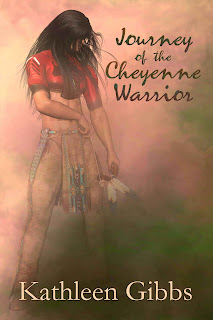 When it came to creating the cover for Journey of the Cheyenne Warrior, I had several visually full scenes to work with. So why did I choose to go with such a seemingly simple composition?

The simple answer ... Invoking a feeling and a mood can often have a stronger impact than over stimulating the eyes with loads and loads of details.

Having said that, it took a lot more work to make it look simple than one would think ... lol.

Of course, a certain amount of artistic license was used. For example, in the book, the MCs hair was braided most of the time. I left my interpretation free flowing. Why? Two reasons: One, I think long hair on men is sexy as do most female readers. Does the name Fabio mean anything to you? Even non-romance novel readers should recognize him as the male model used most on book covers of the genre ... him and his famous locks. So I think you can guess that strategic marketing visual was the second part.

Also, as far as I know, there is no multicolored mist described at anytime. But there is a vision quest. How do you represent a dream or vision pictorially? I went with layers and layers of mist ... lol.

Lastly, I have not read the novel, it's still in editing, but I still wanted to give our warrior a warrior's weapon. I chose a bow.

Even the pose was part of the story. A strong stance, contemplative and at the ready. So 'simple' wasn't really simple ... lol. But I do think it's a more powerful cover, embodying the overall mood of the story, than if I had chosen to recreate a scene from the book.

Brave Eagle grows to manhood amid the constant changes and turmoil on the Plains. Now, in a world full of choices, Brave Eagle must make many decisions, some for his very survival. This was a time of exploration, discovery, and settlement in the West, intervention and treaties with the U. S. Government, leadership issues between the peace chief Black Kettle and the war leader Roman Nose, the Dog Soldiers, the Sand Creek Massacre, the Massacre at Washita. Was Brave Eagle to be a man of war or a man of peace? Was he to be a fierce frightening warrior or a wise peacemaker?  Could he learn to adapt to the white man’s world, or would he be able to hold on to the rich traditions of the grandfathers?
In the middle 1800’s, the white man’s world collides with the world of the Native Americans. How would this affect the people of the Plains? Where would this life journey take Brave Eagle?