Researching for Your Book 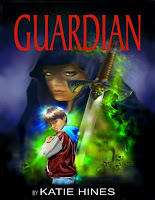 I’d like to share about the research that went into my middle grade urban fantasy book, “Guardian.”
As a prelude, before you can do research for a book, you have to have an idea. The idea for this particular book was first conceived when my husband was toodling about online and ran across a real-to-life treasure mystery about Oak Island, Nova Scotia, Canada. As soon as he shared the particulars for it, I knew immediately it was my story, but it wouldn’t be written without doing research.
As does any good child of the technologically, computer-enhanced world that we live in, I immediately went to Google, and researched the treasure story. I came across a thriving Oak Island Treasure forum and informational pages about the story.
A treasure is believed to be buried on Oak Island, but the source of this treasure is a mystery. Some believe it is a pirate’s treasure, some the missing treasure of the Incans and Mayans, some the Knights Templar. Some believe the whole thing is nothing more than an elaborate hoax. I was fascinated to find that the treasure story was known well enough to have spawned several books.
Off to Amazon. I bought a book about the Templars and the treasure. I bought a couple of books about the treasure story itself. I got a book about the Holy Grail possibly being part of the treasure. I purchased a book about the first Grail story and another book about the Templar’s history and their possible connection to the Grail. I ended up researching the Crusades, because the Templars touched on it, as well as armor for medieval times and armor specific to the Knights Templar. The whole Templar story is fascinating in and of itself and I followed them to their demise and beyond. It seemed that the more I dug, the more connections I ran across. At one point, I even researched poisons because I needed some for the book.
With the online connection to the Oak Island forum, I “met” the real treasure guru, Danny Hennigar via email and then through phone calls. He was able to help me with pictures of Oak Island and the “location” of the treasure pit. He was also the most knowledgeable about various aspects of the treasure story and what the latest theories were. And, since my story was set in both Maine and Nova Scotia, he was able to help with the realistic details of weather patterns, flora and fauna, Canadian slang, boats, and so forth.
The Oak Island Tourism Society also sent me flyers, from which I gleaned more information about the treasure story and location, and maps of the area. Another person I “met” on the forum lives in Cleveland, but had visited Bar Harbor, Maine, and the Oak Island area. He was a great font of information, and sent me many valuable pictures of the area that I was able to use for descriptions in my book. The State of Maine also sent me a great deal of information, and I also learned about a ferry that takes one from Bar Harbor to Yarmouth, Nova Scotia. The ride actually takes several hours, and I was able to name my mythical ferry, “The Pirate’s Run,” which I thought had a nice flair to it.
I did a total of about three months worth of research before I wrote a single word. But the research was well worth it, for I found when I wrote the story, all the facts and suppositions that I’d read about dovetailed nicely into the story. In one sense, I had very little fictionalizing to do because I had all the historical facts from which to pull. Of course, like any writer, I’d get stuck at times, but my husband and I would pull some brainstorming sessions. A lot of times, I’d be thinking of where to take the story next, and a piece of research that I did came to mind, and it fit exactly where I needed it to and really enhanced the validity of the story. To a certain degree, the research that I did pointed the direction for the written story to take.
Good research is hard to replace. Even in the book I am writing now, I am researching glassblowing. It’s a bit more difficult because the only book on glassblowing is out-of-print, although I did run across another children’s author who was writing a book on glassblowing, so I have been in some contact with her. And, there are lots of resources online and there are glassblowers within a few hours drive from where I live.
So, if you’re hot to write a book, be willing to put the hours in on research. There’s no excuse for shoddy research and erroneous details. Sure, my books are for kids, but I did as much research, if not more, for this kid book than I have for most anything else I have written.
...
For more information about Katie Hines and her books, visit her blog at katiehines.blogspot.com, and her website at www.katiehines.com. Her book, “Guardian,” can be ordered through the publisher at http://www.4RVPublishingllc.com and is available in both Kindle and Nook editions.
Posted by Katie Hines at 7:00 AM