Have you ever had one of those 'Crissy Snow' moments? If you don't know who Crissy Snow is, then I'm about to REALLY age myself ... lol. Crissy Snow was the dingy blond on a late seventies, early eighties TV show called Three's Company. Crissy was infamous for not being the brightest crayon in the box, but once in a while, she floored us with a profoundly insightful statement.
I had one such moment the other day on Twitter. I have no idea how I ran a business without Twitter or Facebook, because I know for a fact that 90% of my clients come from the social networking that I do. I had TweetDeck up, like I try to do every day, with my standard columns feeding me the latest Tweets on key topics: 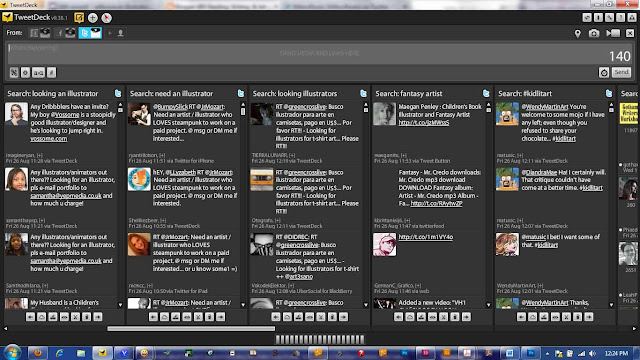 Suddenly, a newbie artist pops up with a somewhat disheartening Tweet:
@???: looking at the stunning work from all the illustrators I've added recently and thinking I should quit right now #inferior
Isn't that sad? The #inferior broke my heart. I responded immediately. I had to tell her "Noooo. It should inspire you to work harder." Then the conversation starts going back and forth a bit. I can tell she knows I'm right, but she is still a bit daunted as she gazes at works that she feels she'll never be able to achieve. Then I tell her why it's good to look at artists that are more practiced and skilled than ourselves, and why I do it all the time:
@WillowRaven: I look at my favorite artists not to feel bad, but to remind myself of where I want to go.
She thanked me for my '#wisewords', and promised she'd try to see it differently from now on, as a challenge rather than a barrier. I felt I had done a good deed and was pleasantly surprised when she decided to follow me on Twitter, and I followed her back.
At that time of the day, I had 3952 followers, which I rarely notice or pay attention to since I don't actively seek out new followers, only now I started getting these RT's (re-Tweets) of my Tweet. Authors and artists and just everyday people, who were not following me, felt something when they read what I 'said,' and felt the need to spread and share that one innocent statement.
I had to laugh. I even told the first person who RT'd it, "Thanks for the RT. Although seeing it spit back at me sounds like I was being all 'deep' or something ... lol ... but I was just trying to pick her spirits up, a bit." Then the 'new followers' stared rolling in. Now, two days later, I have 4049 followers.
That's just a hint of the effectiveness of Twitter. But notice, I didn't get those new followers just repeatedly posting the link to my site or my work or repeatedly broadcasting my services (which I do both a bit, too--there is a time for that as well). My interaction with another person, on a personal level in a situation where I was trying to help someone rather than sell to them, is what I must give credit. It wasn't intentional, but you see the result. Now, 100 or so more people will see my Tweets about my work, or promos, or about books I've most recently worked on, and even this blog post. Their followers will eventually see me, too, and possibly follow.
What must be remembered, however, is that the internet, especially Twitter, is forever. Mind your manners and try not to Tweet anything that may go viral and haunt you or your book/art later ('I got drunk Friday and don't know the man I'm now married to,' type thing). Most importantly, get to know your fans and readers/art lovers. Your craft depends on their support.

Posted by Aidana WillowRaven at 1:22 PM