Perfect example as to why every illustrator should learn basic layout design.

by Aidana WillowRaven
In college, I took a design elective as part of my fine art curriculum. I had no intention of being an ad designer or a logo designer. I only wanted to draw and paint for books. I took it because in my first semester we had to produce two framed and matted originals for finals. Before I put my illustrations under glass permanently, I wanted to sell a few of them as prints at an upcoming con. I went to a design shop, paid $45 an hour to have someone 'clean-up' the original for print. I watched over his shoulder as he worked. All he did was scan my drawing, open it in Photoshop, select the eraser tool, and erase all the little blemishes the scanner picks up that the naked eye tends to ignore on original works. 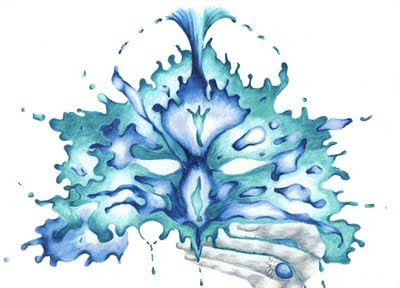 Granted, it was a tedious job. It took him three hours to zoom in and painstakingly remove every stray pixel, but was it worth my paying $45 an hour just to use an eraser tool on zoom? At that time, yes. I didn't have the software or the skills to do what he made look so boringly simple. But take a wild guess what class I added to my schedule the following term? You've got it. Introductory Computer Design.
Now that I've been in the business a while, I don't see how illustrators get by without knowing at least the basics of design and book layout, but you'd be shocked to find how many have no idea how to regulate  the size of their 'canvas' to accommodate room for text in a book.
Many illustrators have a hard time guessing how much 'negative space' to leave for the text. Why is this a problem? It leaves it up to the designer to either cut and crop the art work or to ask the illustrator to re-do or adjust it to accommodate the text. 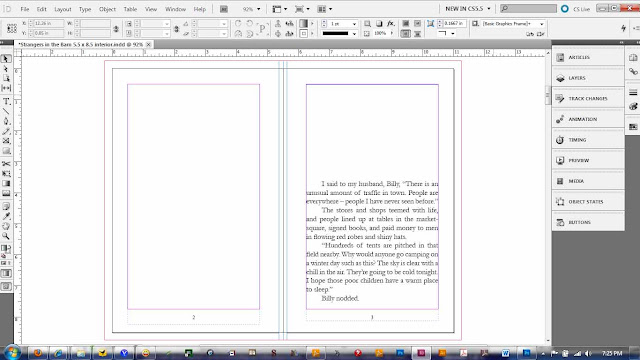 When I am going to illustrate a kid's book, I first layout the often rough draft in InDesign. I figure out what parts of the text are most visually interesting on that page or spread (note I didn't say in the whole book -- save that for the cover art, if you really want to do it), rather than doing a bunch of illustrations that may not be able to be used due to poor placement. 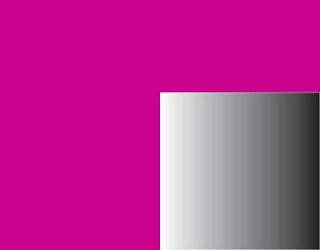 Then, I create a 'canvas' for that particular page or spread using bold colors and sections. One section represents where I can freely place 'viable' art, and the other block represents where the text will be. This is where my 'negative' art will be or where I'll chose to 'fade to text'.
I do this right in the layout, right beneath the text, using the rectangle tool. Then I hide the text and copy/paste the rectangle into Photoshop. Once there, the image tab will tell me the exact size I am working with. At this point, I can either pull it into my 3D software, or I can print it out and re-scale it manually, to use it as a template for my physical composition.
The negative-space art can be anything from a faded area to a blank space to nondescript imagery (like sky or grass). Nothing that could conflict with the text visually, or the designer, if it isn't you, can place a text box or erase it out, and it wouldn't disturb the important art elements. Personally, I am a control freak (accepted this years ago) when it comes to my art, so I'd rather be the one deciding how my work gets presented; that's why I do the design for all of the books I illustrate. Let's see the composition before the layout. 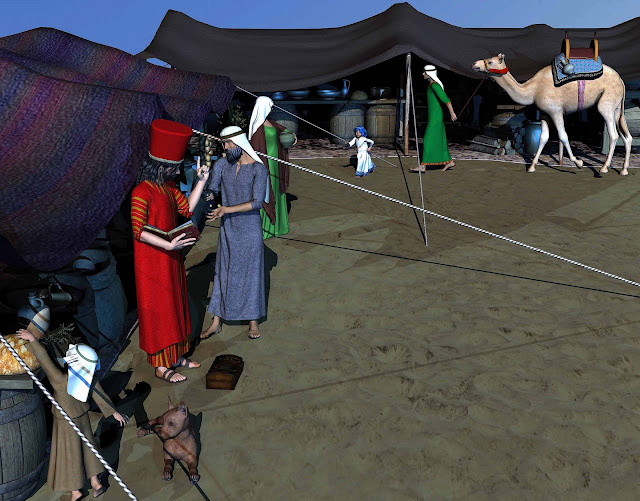 Now if this were a 'normal' art work, there may be a feeling of 'weight' on the left more so than on the right (probably why my sub-conscience stretched that rope clear across the page to the other end and slightly pointing toward the barren corner ;P) , but as you already know, this in not meant to be a stand alone piece. On the other hand, I also feel an illustration or cover art piece should have the strength to carry itself, too, probably why I chose to include the full scene, to give the art itself a 'base'.
Even if you don't wish to become a designer, you can see how KNOWING for CERTAIN where your art can and can't go on your 'canvas' ahead of time is a big help in deciding your colors and composition. That's why I encourage every illustrator to take a basic layout and design course. The most it can do is increase your skills and your art. Now, let's put our finished composition in the layout: 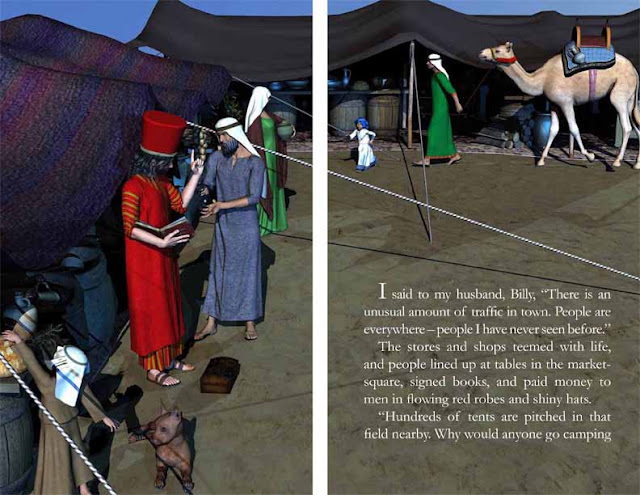 I don't know how well you can tell, but I initially had planned on fading out the tied-down rope, which ran through the first few lies of text, but I felt it took something from the visual. Luckily, I'm the designer, so I had the luxury to shift the text down a little bit. If I were just the illustrator, the designer may have chosen to alter the illo in a way that I would not have liked.
So you see how knowing design can help you plan the composition, and how it can help protect the work as well.
Next article, we will go over the post-work techniques I used on the above digital painting.