4RV is Competing in the Staples PUSH It Forward Contest

This post has two parts, both written by Holly Jahangiri, who was kind enough to allow me to reprint her content. Part One is about the Staples PUSH it Forward Contest that 4RV Publishing has entered into. Part Two is a wonderful interview that Holly conducted with Vivian Zabel, founder and owner of 4RV. Images are courtesy of Holly also!

Staples is celebrating small businesses in May and they are awarding digital marketing prize packages each worth $50,000 to three small businesses as part of the Staples PUSH It Forward Contest. 4RV Publishing has entered this contest, and you can help! By voting every day for your favorite small business, you increase your odds of being randomly selected to win a $1,500 Staples Voter Prize Package. Voting ends May 31.
Link to vote for 4RV Publishing: http://tinyurl.com/a7hrdmv

1.    Go to http://tinyurl.com/a7hrdmv – this is Staples’ Facebook page already set up for you to vote for 4RV Publishing. 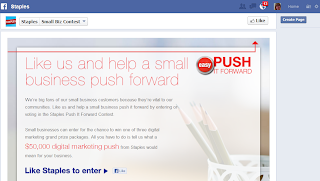 2. Next, you’ll be taken to this page, where you can Vote for 4RV Publishing – just click Vote now > : 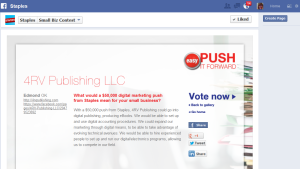 You will be asked to give Staples’ app some permissions (Might as well – you can always revoke them later, but they ask only for access to your public profile data – something everyone can see, already – and to your friends’ list, presumably so that you can share this with them and promote the contest via Facebook. I have plenty of friends participating and have not seen any of them “spamming” me in the name of Staples, so I feel pretty confident in granting the requested permissions.) 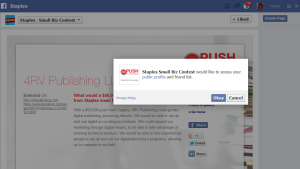 3. Last, but not least, when you vote, you’ll have a chance to enter to win $1500 for yourself – how cool is that? Just for helping a small business achieve more. We could all use this kind of “push,” right? 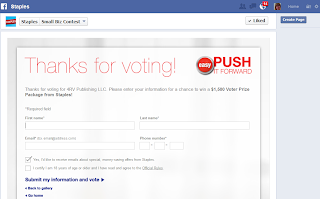 NOTE from Karen: I'm one of 4RV's authors and one of its editors and can attest to the care that goes into 4RV books. 4RV works hard to find and publish quality books at NO cost to the author, but doing this costs money, and like most publishers today 4RV is feeling the financial  'squeeze.' So, give a vote for the small publisher, for a company that cares and helps put great reading in your hands. VOTE FOR 4RV TODAY and every day through May 31st. Click on the link to vote now: http://tinyurl.com/a7hrdmv

Okay, now on to Holly's interview with Vivian.


I recently chatted with my friend Vivian Zabel, founder of 4RV Publishing, the company that published my first two children’s books, Trockle and A Puppy, Not a Guppy.

“Tell me a little bit about 4RV Publishing,” I asked.
“4RV Publishing came into being when as an author I realized that writing had few choices: a major publisher through an agent, subsidy publishing, self-publishing, or vanity presses. I wanted the opportunity for good writers to be able to have quality books published, traditionally. Authors also deserved to have a personal connection to the company that adopted their ‘babies.’” Vivian smiled, knowing that’s the number one reason I chose 4RV Publishing for Trockle, a story which I had written for my son and one that I did not want to sell all rights to or lose all creative say over.

“How many books do you publish each year?”

“How many we publish each year depends on several conditions: staff availability, funding needed, and what submissions are worth producing. In the less than six years we’ve been in existence, we have published a total of 101 books, some of which are no longer under contract (we put a limit on the number of years we have publication rights). We have 26 more titles to prepare and publish this year. We’ve had to close submissions for children’s picture books until 2015, except for authors under contract or invited to submit, because our illustrators can only do so many books during a year.”

Staples is celebrating small businesses in May and they are awarding digital marketing prize packages each worth $50,000 to three small businesses as part of the Staples PUSH It Forward Contest. 4RV Publishing has entered this contest, and you can help! By voting every day for your favorite small business, you increase your odds of being randomly selected to win a $1,500 Staples Voter Prize Package.

“We have received a number of awards and honors the past few years,” said Vivian. Asking her to talk about the accolades earned by books her company has published seems to give her almost as much pleasure as asking her to talk about her grandchildren’s accomplishments. “The most recent were two books which received the Children’s Classical Literature Choice Award: Life on Hold by Beverly Stowe McClure – a book is now in the running for another CCL award – and Walking Through Walls by Karen Cioffi, illustrated by Aidana WillowRaven, which won a CCL silver medal also. Viji Chary’s Porcupine Seeds, illustrated by Bridget McKenna, received the Mom’s Choice Award for Excellence.

“The 2009 Oklahoma Book Award for Fiction went to Kirk Bjornsgarrd for Confessions of a Former Rock Queen.

“We had a number of books place in the Homeland New Day book competition: your book, Trockle, illustrated by Jordan Vinyard, took 1st in Children’s Books, and A Puppy, not a Guppy, illustrated by Ryan Shaw, received 2nd in Tween books. Another author’s books took 1st in Novel and in Young Adult. One book received 2nd place at the North Texas Book Festival. Aldric & Anneliese, by Harry E. Gilleland, received honors from the Military Writers organization. Time Pullers, by Horton Deakins, placed in the top five for the USA Book Awards for Science Fiction. We have books entered in other competitions that haven’t released the winners list yet.”

“‘Another author’s books’? Don’t you remember the titles and who wrote them?” I pressed. I know Vivian doesn’t forget the names of the authors who’ve written award-winning books published by 4RV Publishing. It turns out, they were hers.

“Sure, I remember the titles: 1st in Novel was Midnight Hours by…me. 1st in Young Adult was Prairie Dog Cowboy by…me; 2nd at North Texas was Base Stealers Club by…me.”

I laughed. Vivian is a retired teacher, a mom, and a grandmother. She’s proud of her own books, but would rather shine the spotlight on others’ accomplishments. As the owner of 4RV Publishing, those are the kudos she’d rather promote. Next, I asked the million-dollar question: “Do you charge authors anything to publish their books?”

Vivian shook her head. “No, we do not charge authors anything to publish their books, or for any of the services needed to prepare their books once under contract.”

“I hear things are kind of rough in the publishing industry, these days – even some of the big publishing houses are opening subsidy imprints.”

“One reason publishers get in financial difficulties is the return policy. If a bookstore orders many more copies than they know they will sell, they can return left over copies years and years later and have their money returned. Publishers have to pay that money back, either through Ingram or their own distribution system. 4RV finally did away with returns after being hit with a huge bill for books returned that we could find no record of being bought, much less when they were bought. Major publishers pay millions every year for returned books. Of course that hurts. People aren’t buying books as much as they once did, and it has nothing to do with eBooks being available. It’s the economy. So many Big Guys are opening subsidy imprints. They need the income.”

“Yes, we need the income, too, but we want the best books possible to be under our imprint. Once we accept payment for doing our job, putting out quality books, we lose at least some control over what is published under our name. We want the authors who deserve to be published to have their books in print and then in electronic format without a black mark against their names, which, no matter what some people say, still exists for self-published books. We try to give our authors the best chance to be successful we can.”

“Is it true that even the editors and illustrators work for royalties? So if books don’t sell well, they don’t get paid, either?”

“True and true. However, the owner of the company doesn’t even take royalties, nor does the head of the editorial department. We believe in the company enough that we leave what earnings we have in 4RV. What staff we have are dedicated to our cause. Of course we lose people quite often. They use 4RV to build a good resume and go on to bigger and better things. I can’t blame them, just ask they leave nicely without putting the company in a bind with unfinished projects. However, some stay even when they get positions elsewhere and do a few projects a year.”

“You’re an author, too – does owning the publishing house mean automatic acceptance and fast-track to print for your books?”

“Excuse me as I laugh. All submissions are sent to acquisition editors anonymously, no identification anywhere on the manuscript. One of my submissions was rejected — yep, rejected with malice. The head of the editorial department asked if the manuscript should be sent to a different acquisition editor, and I said, “No, she had valid reasons, and when I have time, I’ll revise and resubmit.” I’ve never had time. In fact, since 4RV was created, I have had only five books published by the company, and they were back when we had few submissions. I will have the first book come out later this summer, the first since early 2010, and it was in the works for three years.”

“So, 4RV is entered into the Staples PUSH It Forward Contest – what would you do with the prize money if you win?” Personally, I can’t think of many businesses that are more deserving of this “push” from Staples.

Vivian has big ideas on a shoestring budget. $50,000 lets her dream bigger – and lesser-known authors stand to benefit, too. “We need to upgrade all our technology and use digital accounting and record keeping. We would be able to create more eBooks. We need to hire people trained in digital marketing and promote our books even more effectively. The prize money from Staples would give us the “push” we need to compete in today’s publishing world.”

Thank you Holly, for allowing me to share your article on Vivian, 4RV Publishing, and the Staples' PUSH It Forward Contest.