Promotion: Review of Sparrow Alone on the Housetop -- The Midwest Book Review 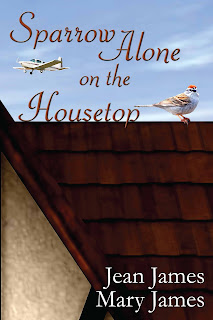 The Midwest Book Review's October issue includes a review of Sparrow Alone on the Housetop by mother and daughter writing team: Jean James and Mary James.

"She ran toward the cavorting plane, positive something terrible would happen in the next few seconds, but it still took her totally by surprise when it did. She plunged into the large hole of Ruben's stump. Her foot went down deep beside the taproot, and her chin hit hard on the ground. A ton of loose dirt slid into the hole along with her, filling her shirt and shorts and even her mouth. When she tried to climb out, her left foot wedged under the root, and she couldn't make any progress except to bring more dirt into the hole. She wiped the dirt from her eyes in time to ascertain the plane had landed safely after all, and she was the only casualty.

"A-Are you okay?" the pilot shouted and ran toward her. She suffered the most humiliating moment of her life when he stepped halfway into the hole to render aid.

So goes the ignominious introduction of Anne Sumner to Jim Orr. Their relationship will take them back and forth between the United States and Mexico on a mission to solve the mystery of strange illnesses in the small towns where Anne has been working as a missionary. Jim is a pilot for her father's company. He transports the payroll for the large company and does some crop dusting for them.

Several of the villagers who work in the fields start becoming ill with a mysterious flu-like disease. When Anne is struck down by this same disease and is rushed to a hospital in Houston, the questions begin. Why won't the doctor give her any information about what might be wrong with her? Why did her father put her to work in her old job in public relations? Why did only she and a couple of others get sick in their little village, but many in a neighboring village were struck down? The answers to these and other questions lead her to the horrible truth. She begins to unravel the mystery through talking with many of the villagers who had become ill and by getting a second opinion about her own illness. What she uncovers is the inner machinations of her father and her sister to cover up the true reason for the mysterious illness, as well as other questionable events. She does not know who she can trust - her new friend, Jim, her cold sister, Angeline, her brother Fred - but she certainly cannot trust her father.

Anne's faith is tested, even as Jim's grows. With his help, she begins to regain her conviction and trust in the right people. Together they untangle the web of deceit that has overtaken the whole Sumner Company and the small towns in Mexico.

This book, written by the mother and daughter team of Jean James and Mary James, tells an exciting story about death, intrigue and romance that the reader will enjoy. The very interesting final confrontation between Anne and her father leaves the reader wondering.

Jean James was active in many outdoor pursuits before becoming a full-time writer. She collected live mammals and reptiles for international distribution, collected live venomous snakes for antivenom production, and worked on sundry wilderness construction projects. She's married to WW2 veteran, William James, and they have six children.

Mary James has spent half her life writing and the other half making music. From age five she has written songs and performed as a touring singer/musician. Today, she spends most of her time on the road but is always anxious to come home to her photographer husband and troublemaking horse.

Sparrow Alone on the Housetop is found on 4RV Bookstore, and all books are on sale.

4RV Publishing website
Posted by Vivian Zabel at 12:59 AM