Promotion: Review of Priscilla Homes and the Case of the Glass Slipper -- The Midwest Book Review 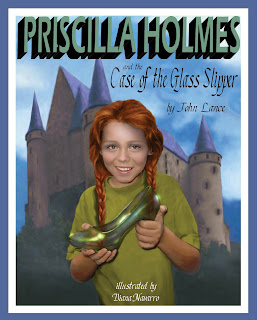 Appearing on "Katherine' Bookshelf," in The Midwest Book Review for September, is Priscilla Holmes and Case of the Glass Slipper by John Lance and illustrated by Diana Navarro .

John Lance has done it again! He has written an amusing children's book with a new twist in Priscilla Holmes and the Case of the Glass Slipper. There are some curious references to a familiar fairy tale that has to do with a beautiful girl who went to a dance at the palace and danced with the prince, then left in a hurry and lost her magic glass slipper.

Priscilla, the Ace Detective, is called on by the prince to find the beautiful princess he danced with at the ball. So she gets to work. She begins to follow the clues and comes up with 3 clues that she has to sort out to solve the mystery of who the missing princess is. They are:

3. A pair of mysterious strangers. One wears the same size shoe as the missing princess."

She follows the clues to Gary the Glassblowers, then to The Magic Bean to talk to Merlin. This leads her to Aunt Mag's house and the two mysterious strangers. Because of her Ace Detective status, she soon puts the clues together and finds the princess just as the prince shows up. Then comes the twist. For this review, suffice it to say that they all lived happily ever after. You will have to read the book to find out what happens that is a little different from the story you may remember from your childhood.

The illustrations, so aptly done by Diana Navarro, as she did with the first book about the ace detective, provide the reader a definite idea of the characters in the book. The background she depicts in her art is also very well done.

Priscilla Holmes and Case of the Glass Slipper is now part of the holiday sale found on the 4RV Bookstore.


4RV Publishing website
Posted by Vivian Zabel at 12:56 AM