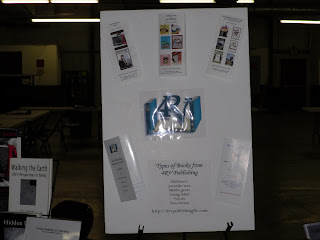 October 8, 2011 found 4RV Publishing and three members with 43 titles at the Eastern Oklahoma Author Fest in Tahlequah, Oklahoma.
Due to the massive weight and hard work involved (as well as limited display area and racks), only 43 of the 60+ released books were able to make the trip.
As people entered the Cherokee Community Building, the sign to the left is the first thing they saw. The display tables formed an L, one table to the right of the sign, one to the left, and one running at a right angle down the left side. Photos show the display racks and display areas. 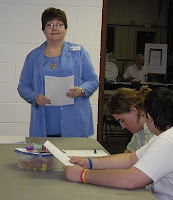 Vivian Zabel held a workshop on "Make Your Writing Snap" to help attendees have a better idea of what manuscripts need to be appealing to editors, agents, and/or publishers.  At least some people attended, even though the workshop was early in the day, soon after the doors opened to the public. 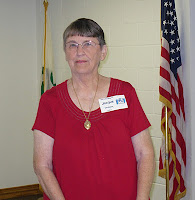 Jacque Graham had the workshop immediately after, "How to Write Your Family Story." Again, some attended even though early in the day. 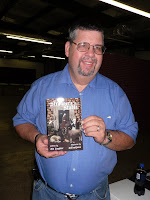 Jim Laughter's first children's book, and first book with 4RV, made its debut at the festival. Strangers in the Stable also sold more copies than any other book available.
The attendance was lighter this year than at this same festival in 2010, but 4RV did much better than most of the participants. 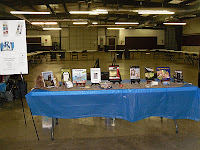 These photos give an idea of how the 4RV Publishing tables and displays greeted the public as they toured the festival.
Even though many other activities competed for people Saturday, some found their way to the Eastern Oklahoma Author Festival. 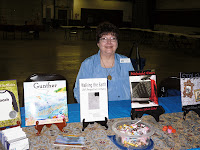