When research dictates a re-vamp ...

Sometimes it just can't be avoided.


I try to create a book's cover before starting on a book's illustrations, which gives the author and publisher something to use when building hype for a book's pending release, while I work on the illustrations and layout. But once in a rare while, a cover art and design re-vamp is needed.

One such instance is my latest children's book, Strangers in the Stable by Jim Laughter. It's a sweet little early reader that was extra fun because I got to explore the whole visual interpretation in digital paint vs traditional mediums. I did the cover first, as I usually do, and both the author and publisher loved it (always a good thing ... lol). One problem I learned while doing research for the following illos, I had the architecture all wrong (not such a good thing).

As is often the case, the story itself has a little more room for 'creative license' than the visuals do. The original title said 'Barn,' so I made the setting a barn, as most westerners think of it. Upon further research, I found that not only does ancient Bethlehem not use wood buildings to house their livestock, they also don't refer to such structures as barns. They used, and still use for the most part, stone structures and tents. Not wood and lumber barns ... lol.

Now, many publishers and artists would have just let this pass. As they say, time is money. After all, how many six-year-olds would notice? But 4RV has a high standard, and so do I. My own sense of aesthetic and accuracy just wouldn't let me let it go. So I talked to Vivian, and she agreed, and in a matter of minutes a decision for accuracy over convenience and time was finalized. Re-vamp it was.

And, as with most re-vamps, as much as I grudgingly hate them, I think they always turn out for the better. I assume it's much the same way with authors (dreading edits, but happier with the final result, none the less). 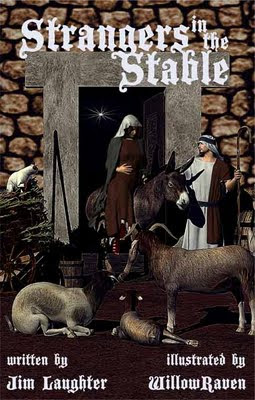 Here is the re-vamped cover. You tell me which one pulls your mental awareness into ancient Bethlehem better? Which one puts you more mentally 'there,' at Jesus' birth? See the difference just the architecture makes when it come to the mood of an illo?

Next question, would you be as willing to go through a re-vamp? Or would you have thought: 'The publisher and author approved it. I don't have time or money for a unnecessary re-vamp. I won't bring it up.'

As artists, especially illustrators, we need to remember even if the illustration 'looks' right, it could still be 'wrong,' and its our responsibility, if we discover an error such as this, to bring it up with the publisher or author. You never know, it may take the book from good to better.

Besides, how often have you criticized the cover artist on their choice of visuals if you know something portrayed way inaccurately? Heck, that's why I took art in college (my pet peeve is proportion, ie: legs too small for the rest of the body, scale wrong, etc).

Try to remember, each piece should be worthy of being 'a portfolio piece.' And misrepresented images are not good portfolio pieces. So when a re-vamp is needed, don't resist. Pull up those sleeves, dig out your tools, and get to work happily, knowing you're about to create visual genius...lol.