What Questions Must be Asked & Answered, Before Creating a Children's Book Cover?

Part 1
by Aidana WillowRaven
When contemplating what is needed for the cover of any given book, some basic rules apply to every design or composition. You need to know what the title is saying. You need to know what the title isn't saying. And you need to know to whom the author is saying or not saying the title.
For example, I will use a children's Easy Reader, I illustrated and designed, about a little boy and his day at the zoo. What is the title saying? What isn't the title saying? Who is the author saying it to? Let's look at it (I’ll be using 4RV Publishing’s Being Jacob: A Day at the Zoo by Suzy Koch): 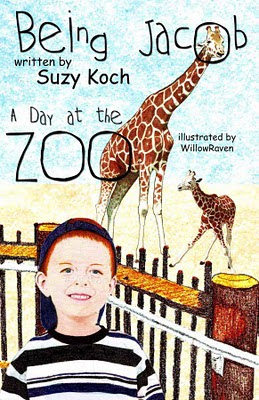 What is the title saying? It's saying this story is about what life is like 'Being Jacob' and what happens when he spends 'A Day at the Zoo'. It may seem pretty basic, but I still have to mention it. Obviously, we need to see Jacob, the main character of the series, and we need to see something that is typically only seen at the zoo. Jacob, an exotic zoo type animal or two, and the enclosure to the animal's habitat, clearly depicts a kid not on safari, or in his back yard, but at a zoo. There could be more elements, but be careful not to over do a cover with too many objects or characters, especially for kids. We want to get the point across without over shadowing the title.

What isn't the title saying? It isn't saying Jacob is excited about a giraffe. That is a visual hint about something specific in the story. Yes, giraffes are typical to most zoos, and, yes, I could have drawn a gorilla family, but I chose the giraffes, specifically the mother and baby giraffes, because of a special situation in the story. Think of it as a subliminal message, in a way.


To whom is the author saying the title to? Look at the font (which should also match the genre and story – It's part of the over all piece). It's written much like a little kid would write. A bit sloppy, some letters over powering other letters, etc. The author (and publisher) want the smaller kids to relate to this cover. It looks like it's 'written for them, by one of them.' Look at the scene's colors. High contrast. Bright against dark. Kid's are naturally attracted to high contrast. People often mistake this idea to mean primary colors. That works, too, for some pieces and styles, but when a realism style is being used, 'real life' colors, just maybe intensified, should be used, too. We want the reader to see this boy as a 'real' kid, like them, not a cartoon character. Primary colors that are used in excess will give that cartoon impression, and will attract more preschoolers, rather than 6-8 year olds. Which comes to the last point: This book is targeting Easy Readers (also known as Early Readers). That is ages 6-8 or sometimes 8-10, depending on word count and the main character's age. The artist must know what attracts readers of what ages. What colors, what styles, what themes. The artist also needs to know who is ultimately buying that book. A parent. So they have to know how to catch his/her eye, too.


Next time (two Friday's from today), we'll look at a more advanced reader/genre, MG/YA (middle grade/young adult), and go over 'What Questions Must be Asked & Answered, Before Creating a Children's Book Cover?'. I’ll be using another book I designed, and did the cover art for, 4RV Publishing’s Just Breeze by Beverly Stowe McClure, for the example.