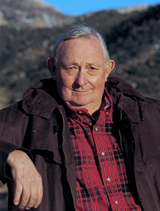 Tony Hillerman, one of my favorite authors, and I met about five years before he laid his typewriter/ computer aside for a heavenly one. Anthony Grove Hillerman, born and raised in Oklahoma, was born May 27, 1925 and died October 26, 2008. He has been gone for over three years, but his words live on.  I'm going to share an tribute I wrote about Tony, who said he was prude and signed one of his books to me, "From one prude to another."

I heard that. So you don't think we old fogies should have or do have heroes, huh? Well, young whipper snapper let me tell you a thing or three: Just because we have lived long enough to be considered experts or leaders or even folks who have outlived everyone else, we still have people we admire and dream of being when we grow up.

I attended the Red Dirt Book Festival in 2003, the first one held. The featured speaker was Tony Hillerman. I not only attended all of his sessions, I was able to visit with him outside of the structured events. What a delightful man. His mysteries fascinated me because he wove the suspense into his knowledge of the Navajo culture. He autographed two of his books, but the autograph in his autobiography was personal and touching. I'll miss Tony Hillerman; Joe Leaphorn and Jim Chee can be found again in the books that Tony left behind.

One thing he shared with us that weekend years ago, some people around him in the publishing business considered him a prude because he didn’t include sexual scenes. One person told him the closest he came to sexual tension was to have a man and woman shake hands.

Many people have written about Tony over the years, and since his death, but one article that best explains his books is an article by the author himself: “Behind the Books” by Tony Hillerman.  I advise anyone and everyone to read that essay.

Yes, years have passed since Tony Hillerman left us, but a part of him will always remain.