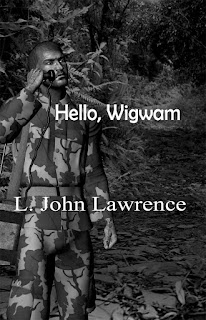 Just before Christmas, 2016, L. John Lawrence received notice that his novel Hello, Wigwam won the Military Writers gold seal award, one of the highest awards given to books about military life. The announcement he received is copied below:


Your book, Hello, Wigwam, received a GOLD Medal in the 2016 Military Writers Society of America awards young adult category. I am attaching the review to this email. Please use it any way you like. You will receive the medal and 100 stickers from Dwight Zimmerman sometime in the new year. Your award will be announced in a general email blast to the organization membership, in the Winter 2017 MWSA Dispatches magazine, on the MWSA website, and in a national media release. There will be no Awards Ceremony for 2016 winners.
Process:
As you know, 2016 was a transition year. The MWSA Awards Committee (Betsy Beard (Chair), Sandra Linhart, Carolyn Schriber(Author of the Year 2015), Bob Doerr (Author of the year 2013 and Vice President of MWSA), and I) revamped the entire program. The already stringent requirements were toughened further. Three judges read every book submitted and scored them based on content, visual, style, and technical criteria. The three scores were then averaged. To receive a medal, a book had to reflect MWSA's exacting technical standards as well has a high total score. If there was disagreement, the three judges met to discuss the books in detail. Books are judged to a standard, not competitively against each other. If you get the score, you get the medal. While this process took longer, we feel that it was worth the time to ensure that only the very best books submitted were recognized.
Best wishes for the holiday season and congratulations on your personal and professional achievement
​ with this work​
.
Joyce Faulkner and Betsy Beard, MWSA Awards Directors
Joyce Faulkner
Betsy Beard
MWSA Awards Directors


This award winning book can be found on the 4RV online bookstore (http://www.4rvpublishingcatalog.com/l-john-lawrence.php) and is available in hardcover and in paperback. It could also be obtained through regular bookstores and other online stores, such as Amazon.


Literary Classics is pleased to announce that the book, Hello, Wigwam  by L. John Lawrence, has been selected to receive the Literary Classics Seal of Approval.
L. John Lawrence exhibits a true gift of the pen in his depiction of a young man who is swept into a world of blood and battle which is not without its ironically funny moments.  This riveting story is superbly written, displaying poignant moments interspersed with a healthy dose of satire.  Hello, Wigwam is recommended for a mature young adult audience and has earned the Literary Classics Seal of Approval.

Five-Star Review By Sandy Appleyard for "Readers' Favorite"
Hello, Wigwam by L. John Lawrence is a wonderfully told story. The author describes, via a combination of anecdotes, quotes, and edge-of-your-seat life-like accounts, what the boy sees, feels and learns. The reader gets the sense that the young man is wholesome, likeable, and will always try to do the right thing.
Hello, Wigwam is an entertaining read and is recommended to those looking for an interesting, educational, humorous, and thought-provoking novel about a young boy who becomes a man.

Want to read a book that will hold your attention? Read Hello, Wigwam by L. John Lawrence.