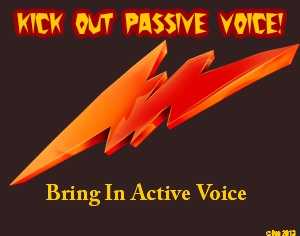 The detective waited. He said to the police officer. "I saw it with my own eyes. This author used passive voice in his manuscript."
The policeman took off his cap, scratched his head and said to the author, "Kick it out."
The author put both hands out palms up. "But, Officer, I don't know what passive voice is."
The detective and officer threw up their hands in disgust. They pointed at the author and said, "Learn about passive voice and kick it out of your manuscript in 24 hours or we'll book you."

I hope you enjoyed my humor. I certainly hope you don't get in a situation like that. However, if you do, I'm here to help you.

Here is an explanation with examples to help you understand about voice. There are two voices: Active Voice and Passive Voice.

Active voice has the noun subject (doer) verb order.  The verb to be used as a linking verb shows the condition or existence of the subject.

Passive Voice usually uses a form of the verb to be and a past participle of a verb: is, are, was, were, being, had been. The subject is not named before the verb in a sentence using passive voice.

In active voice, the subject does the action. The order is simple - subject followed by verb.

In passive voice, the subject (doer) isn't before the verb. The subject is absent or it may come in another part of the sentence.

The ball was thrown. The ball did what? Nothing. It was the receiver of the action. On its own, a ball can't do anything.

Examples of sentences using passive voice where the subject - the doer is missing.
Think about it.  It's harder for people to read and figure out what's really going on when authors use the passive voice. Therefore, editors and readers prefer books written in the active voice.

Search for the passive voice in your manuscript. If you use Microsoft Word, it has a review tool to check spelling and grammar. If a sentence is in the passive voice, it will tell you and suggest that you revise the sentence.

If you use a WordPress.com blog, before you publish, it asks if you want it to show you errors. It flags sentences that are in passive voice. Remember when you change the passive voice to the active voice, put the subject (the doer) before the verb.

Active-Passive Voice Quiz for you.

Here are ten sentences: Decide if they are active or passive voice and why? The answers are below. Make all ten choices, then check the answers. If you are able to recognize the passive voice, you'll be able to kick it out of your manuscripts.

1. Jason taught the neighborhood kids how to play football.
2  At the garage sale, profits were made.
3. The firemen put the hoses down.
4. A severe weather prediction had been announced earlier.
5. A few actors whispered their words.
6. The weather man had announced a severe weather prediction earlier.
7. Words were whispered.
8. Cecilia made profits at the garage sale.
9. The hoses were put down.
10.Kids were taught how to play football.

Active voice clarifies meaning and makes your writing stronger. Use active voice in your sentences. Your editor and readers will thank you.

Thank you for reading this article. Please leave questions or comments. It's fun to hear from you. Good luck with your writing.

Celebrate your life.
Never Give Up
Joan Y. Edwards