Hunt for the Flag Blog Tour - by Stephanie Burkhart 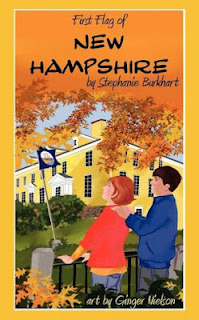 In "First Flag of New Hampshire," Aly and Miguel travel to Portsmouth, a town on the seacoast with a rich history of naval service. They visit the naval museum looking for a clue to find the first flag of New Hampshire. I've been to Portsmouth a couple of times myself, but it's been a while and my memory is a bit sketchy. I do have a strong affinity to the sea and wanting to be near water. Some of my favorite memories are going to Hampton Beach as a young girl and visiting Portsmouth with my friends in the 1990's. 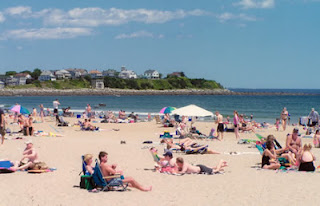 Portsmouth is a town with a rich colonial history. Before the Europeans arrived, the area had been settled by the Abenaki Indians. In 1630, the town was settled by English immigrants.

The Naval Shipyard was established in 1800. Prior to that, a 32 gun frigate, The Raleigh, was commissioned by the Continental Army and constructed on Badger Island, in Kittery, Maine, just over the border. It launched on May 21, 1776. The Raleigh saw battle during the Revolutionary War, but was eventually captured and used by the British.

The Raleigh is on the state seal of New Hampshire and the state seal is on the official state flag. While the ship was built in what is considered Kittery, Maine, it is only 2/10th of a mile from Portsmouth and constructed in the seaport's annex. The state has a rich tradition of shipbuilding, and the Raleigh was one of the first ships built to serve the new nation. 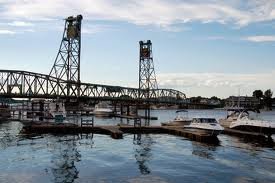 New Hampshire has the smallest coastline in the United States – 9 miles.

Interestingly, NH did not adopt the current state flag until 1909. It was modified in 1931.

Prisoners of war from the Spanish-American War were housed at the Portsmouth Naval Base.

In 1905, the Treat of Portsmouth ended the Russo-Japanese War. President Theodore Roosevelt was awarded the Nobel Peace Prize in 1906 for his efforts.

During World War I, the naval base began building submarines. The first one ever built by the navy was constructed there.

BLURB FOR: FIRST FLAG OF NEW HAMPSHIRE:
Alyssa has to take American Studies for college prep, and she hurries to the first class. She's paired with classmate Miguel De Soto to find the first flag of New Hampshire, but the flag has flown only four times in New Hampshire's past. Can Alyssa and Miguel track the flag through history before time is up?


Hunt For the Flag Giveaway:

Answer the follow questions about the NH flag. I'll pick a winner to receive an Easter/Spring book bag (made by my talented friend, Lori Powell), full of goodies to include chocolates, a magnet and more.

Why are there 9 stars dispersed between the laurel leaves on the NH State Flag?

FIND ME ON THE WEB AT:

Posted by Stephanie Burkhart at 10:39 AM