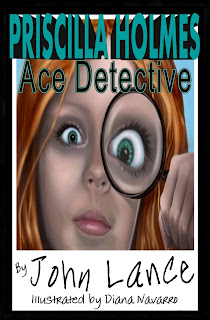 Since we often have days without any articles scheduled, presenting recent book reviews and book trailers might interest readers. I can post such material without it being self-promoting, too, where if the authors involved did, they would seem to brag.
Katherine Boyer recently posted a review for Priscilla Holmes, Ace Detective (written by John Lance and illustrated by Diana Navarro), the first in John's series taken from fairy tales. The review has appeared on Amazon, Barnes and Noble, and Books a Million. It will appear in the Midwest Book Review in September. She graciously gave permission for the review to be posted here.
·Publisher's address: PO Box 6482
Edmond, OK 73083
Priscilla Holmes, Ace Detective by John Lance is a very funny, imaginative children’s book that calls on many familiar fairy tales, such as the Muffin Man, Cinderella, Rapunzel and others, to tell the story and solve the crime.  It will make adults want to reminisce about their childhood and retell their favorite stories.
The mystery loosely follows the story of Goldilocks and the Three Bears as they return home and find someone has been in their house.  Priscilla is hired by the Bear family to find out who broke furniture in their house and ate their porridge.  She begins her investigation and finds the following clues:
“1. Shoeprint (small)
2. Long blonde hair
3. Pink bow”
With just these three clues and her ‘greatly honed detective skills’ she investigates and solves the mystery.  The solution will not be a surprise to those who are up on their fairy tales.  However, following Priscilla through her detecting process is unanticipated fun for all ages.  The penalty for the perpetrator is one that is in line with the offense.
I really enjoyed the book and Mr. Lance has a great knack for relating fun stories for children.  The illustrations by Dianna Navarro are wonderfully imaginative and telling.  Children are going to have a lot of fun with this story and laugh at the insertion of other familiar stories and nursery rhymes.
In an interview with Tracy S. Morris, Mr. Lance discussed the origin of this story:
“Priscilla Holmes is one of those rare cases (for me at least) where the character came first. I was sitting in my study one day and looked out the window to see my daughters playing in the backyard and that was when a girl detective popped into my head. Priscilla is smart and determined (like my daughters) and has a distinct dislike for cleaning her room (also like my daughters).”
John Lance lives in Massachusetts with his wife, two daughters and two slightly-crazed Labrador Retrievers.  He enjoys spending time with his family and reading, writing and working in his garden.
Name: Katherine Boyer
E-mail address: kbooks1@verizon.net
The book may be bought from the 4RV Publishing Catalog, as well as found on other online bookstores and through any physical bookstore.