Some very exciting news came my way a few days ago from one of my favorite authors. A Family for Leona, by Beverly Stowe McClure (published by 4RV Publishing), has taken FIRST PLACE in the 2018 Purple Dragonfly Book Awards under the Historical Fiction category. And guess who created the cover art? Yep: yours truly. 😀 Isn't that awesome?

The contest is sponsored by Story Monsters LLC, which is home to the award-winning Story Monsters Ink® magazine, the literary resource for teachers, librarians, and parents — selected by School Library Journal as one of the best magazines for kids and teens.

They also help authors of all genres strive for excellence through their marketing and publicity services, Dragonfly Book Awards contests, Story Monsters Approved! awards program, and opportunities to connect with schools and the media.

Not sure where I can fit another award seal, lol, but there's no reason I can't show it here. (The gold seal you see on the cover right now is 2017's Children's Literary Classics Award -- Their top honor.) 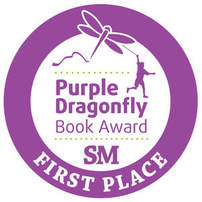 Ten-year-old Leona Chapter doesn’t understand why her papa left his six children at the Brooklyn Home for Homeless Children after their mother’s death in 1921. Each day she prays he’ll return and take his children home. God, however, isn’t listening. Her brothers and sisters are either adopted or run away, leaving only Leona and Baby Mildred in the orphanage. Leona promises she and Mildred will be together for always. A promise she cannot keep, for Leona, along with her friend Noah, who she defends from the bullies Hiram and Jehu, and several other orphans, are soon on a train headed to Texas, while her sister stays at the orphanage. Leona vows she’ll go back to Brooklyn, the first chance she gets.

Onto wrapping up the next book 😁
Until next time ...
Aidana WillowRaven
Art Director and AP of Operations at 4RV Publishing
http://WillowRaven.weebly.com

Posted by Aidana WillowRaven at 11:34 AM