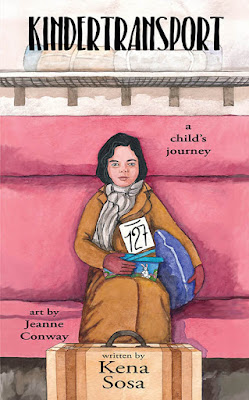 In the early 1930's, the Nazi persecution of Jews and other minorities began. Adults lost jobs, couldn't provide for their families, became discouraged and despondent, were sent to prisons. However, their greatest fear -- What would happen to their children?

Therefore, just before the outbreak of World War II, the Nazis pushed Jewish families to do something they never imagined they would. They sent their children away on a train to faraway places to live with strangers so that they would be safe until the danger passed.

In Kena Sosa's tale of a young Jewish girl, she involves readers in the ordeal suffered by Helen, whose parents do what they must to save her: They send her away. As she gets on-board the Kindertransport, a train to hope, ten-year-old Helen will never be the same, but she will be saved.

Holocaust Children's Literature provides a website that includes a database of stories and books written for children concerning the Holocaust, a period in history that needs to be documented and remembered.
If a person searches for "Kena Sosa" in the database,  the information for Kindertransport: a chld's journey will appear.

Kindertransport can be purchased on the 4RV Bookstore (at the bottom of the page), as well as through other bookstores, online and brick and mortar.