Star of the Team receives Gold Seal from Literary Classics 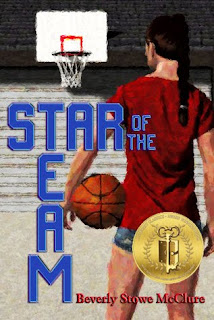 Star of the Team by Beverly Stowe McClure won the coveted Gold Seal from Literary Classics. Literary Classics will review books that are submitted, and authors can enter their books for consideration for the LC awards.

The book, a 4RV Tweens & Teens imprint, is Beverly's fourth book released by 4RV, and she has others in the works. The author manages to get into the mind of pre-teen and teen aged girls.

The blurb on the back of Star of the Team reads: A girl. A dream. An accident. A dream shattered. Eleven-year-old Kate Taylor dreams of being the star of her basketball team, Angels. When Kate's tooth is knocked out at one of the games, and her mother, who is also her coach, says she can't play until the tooth the dentist replants heals, Kate's dreams are in jeopardy. Add Emily, the new girl at school who claims she's the best, and Kate faces a challenge to prove that she is the star. Will Kate succeed? Or will Emily ruin Kate's plans?

An editorial review by Michelle Robertson for Readers' Favorite states: Star of the Team by Beverly Stowe McClure is a wonderful children's book introducing young readers to the concepts of patience, teamwork, and friendship. The author does a great job portraying those concepts with creative character development and a heartfelt dialog throughout the book. The text is written as though it is coming straight from an 11-year-old's thoughts.

The pure innocence of a youthful mind is both humbling and humorous. The life lesson and message included in the story are powerful.

The review by Literary Classics follows:

Author Beverly Stowe McClure continues to captivate young audiences with her book, STAR OF THE TEAM, which speaks to girls on many levels. Her ability to portray the myriad of hopes, fears and frustrations of her young characters is a big part of what makes McClure an exceptional writer. Fans of McClure's writing will not be disappointed with this book, which will appeal to young readers, even those who may not follow basketball.

NOTE: This post was created in November but inadvertently saved as a draft rather than published.
Posted by Vivian Zabel at 3:08 AM