Great art makes the hair on our arms tingle, doesn't it?

Idina Menzel hits it out of the ballpark with the theme song from Disney’s Frozen, and the song is indeed goosebump-inducing. We may never know what inspires artists to create the works they send out into the world, but from the art that emerges—and the emotional reaction we feel when we encounter it—we know one thing for sure: The artist didn’t let go of the idea. 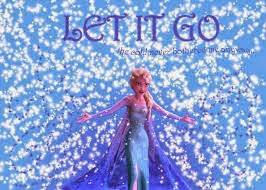 Create Bravely
Let it go, don't let it go . . . it gets confusing, doesn't it? At last weekend’s New England SCBWI conference, the theme was “Create Bravely.” The New York and Boston editors in attendance constantly spoke about finding work that sings. Of course, the golden ticket for many sitting in the audience in Springfield, Mass last weekend (and in writer’s conferences across the nation this spring) is sending the right piece of writing that will sing to the right agent—but I suggest that part doesn’t really matter as much as this: Does it sing to you?

It doesn’t matter if your work sings to a particular agent or editor. If it sings to you, you will persist until the writing sings loud enough for everyone to hear—including an agent or editor.

Letting it go can mean different things.
Let go of your creative inhibitions. Throw in everything you've got to make it GREAT.
Consider putting it away and move along to the next great idea. It may call you back.
Consider revising the work into a different piece. Perhaps it will sing louder as a novella or article.

So let it go and be brave as you release your completed vision into the world and face the music from editors and agents perhaps telling you to tweak it further. If it sings to you, it is worth going all the way!

Posted by Suzanne Cordatos at 8:18 AM