The Way of All Grammar

When my father was a kid, English grammar, parts of speech, verb tenses and the like were an important part of the school curriculum. By the time I got to school, now a good many years ago, things were much laxer, to the point where my first real introduction to verb tenses was through my French classes.

I still remember coming home and telling my father, who spoke fluent French, that French had a subjunctive but English didn't. He set me straight.

Even so, we learned far more about grammar than today's kids, who apparently can't even figure out which form of a pronoun it's appropriate to use after a preposition. If you don't believe me, take a copy of your local paper and go through the Op Ed page looking for grammatical errors. I'm pretty confident you'll be shocked. That is, assuming you are old enough to have learned 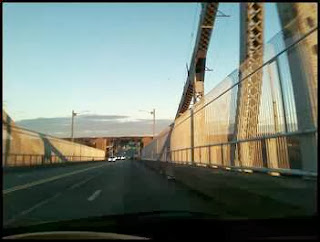 I say it's past time to bring back rigorous instruction in the fundamentals of our language.

Prepositions were a particular peeve of my dad's. Here's a typical conversation:

Once I made the mistake of pointing out that "C'est moi" is perfectly correct in French. Dad then repeated the rules for pronouns in French -- in French.

I can still repeat both sets of rules. And it's been a *long* time.

Dad always repeated the entire rule and it's full explanation each and every time we made a grammatical error. Major teeth grinding, but now I can still recall my grammar, and as a result was a whiz at helping out with fifth grade English homework -- also math, but that's another story --

Dad also would never give us the meaning of a word we didn't know -- he made us look it up in the dictionary. This was most annoying at the dinner table, when we, for what I hope were obvious reasons, weren't eager to jump right up and look up the word.

I didn't relentlessly correct my own kids, and as a result they lack the firm grasp of adjective, adverb, and the like that my sister and I had. I don't know -- maybe it was a mistake. However annoying it was at the time, I did really learn a lot as a result.

Here are a few resources. For more check http://www.margaretfieland.com/writers_resources

Posted by Margaret Fieland at 9:08 AM