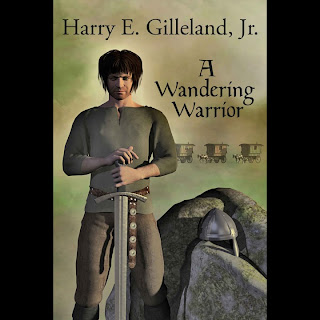 From time to time we share outstanding reviews of 4RV books in this newsletter, but only books from 4RV Publishing. This time we'll share what a few readers had to say about Harry E. Gilleland, Jr.'s historical novel A Wandering Warrior. The cover art and illustrations inside the book are creations from Aidana WillowRaven.

We can't post all the reviews  that have appeared in print and online, but we will at least a few short ones and one long review.

“You'll definitely be rooting for Thomas to succeed.” -- Reviewed by Samantha Rivera for Readers' Favorite, A Wandering Warrior: 5 Stars
Thomas is a warrior in medieval England. His story is filled with love and loss, hope and despair, and you'll definitely be rooting for Thomas to succeed. He has much to accomplish. This is what makes Thomas such an interesting character. He gets hurt, he falls in love, and then he gets hurt again, but he always keeps fighting. This story is also about Emalda and Juliana and how their lives tie into Thomas'.

“The plot is interesting and the plot twists are unexpected and well handled.” Homer M. Scarborough, Jr.

“There is so much more that happens in this story: romance, adventure, combat, damsels in distress, love found, and love lost.” Lori Lundberg

“The story, locations, and characters were all well written and described and do a good job and transporting the reader into the story. ” Elizabeth McCrary

Finally we go to an excerpt from the review by Hannah Sheldon-Dean, Bookkaholic:
Highlights: Full of rich historical detail and snappy action sequences.
Synopsis: Thomas Beaumont is an itinerant soldier in twelfth-century England. When his only family members are killed, Thomas sets out to avenge their deaths and discovers a vast world of adventure and romance along the way.
Genre: Historical Fiction Rating: A
In the latest book from Harry E. Gilleland, Jr. the prolific novelist and poet revisits the genre of historical fiction, this time with a tale set in twelfth-century England. It’s a tough world of ruffians, duels, and political machinations, and A Wandering Warrior leads readers through a rich tour of the period’s intrigues.
The novel’s hero, Thomas Beaumont, begins the book as a humble commoner, having lost his parents at a young age and spent his teenage years fighting alongside his uncle and older brother as an itinerant soldier in any army that would have them. Despite his low birth, Thomas is an unbeatable swordsman and ferocious fighter—skills that suddenly become even more important when both his brother and uncle are killed, leaving him without any personal ties or sense of home.
Badly injured himself in the series of frays that led to his family’s death, Thomas is taken in by a family of “Travelers” who roam the countryside in covered wagons, searching for adventure and the chance to earn a few pounds. As Thomas heals, he grows close to Emalda, a beautiful Traveler girl who hopes to marry him. But Thomas remains preoccupied with vengeance; although he wishes to remain with Emalda, he feels strongly that he must find and kill the sheriff who brutally murdered his brother. And so Thomas becomes entangled in his two central—and conflicting—quests: to avenge the deaths of those he loved, and to find new love with a worthy woman.
It’s been said that all literature is really about sex and death, and to some extent, A Wandering Warrior reflects that principle: when Thomas isn’t fighting to the death with some bad guy or other, he’s searching relentlessly to find an elusive lover. Along the way, though, he also manages to pull off heroic rescues, make loyal friends, and explore the vast expanse of England. True to the book’s title, Thomas does indeed wander, focusing on one epic task after another in an effort to find a place for himself in an often-hostile world. Interestingly, the missions that initially seem central to the plot do not continue throughout the whole book; it’s an unusual decision, but given the nature of the protagonist, the plot’s discontinuity makes an odd sort of sense. Gilleland flips around the conventions of linear narration that often dictate such tales of chivalry, and instead allows Thomas to wander where he will, taking up new quests and acquaintances as he goes.
It’s entertaining to watch and see where Thomas’s wanderings will lead him next, but what makes the A Wandering Warrior especially engaging is the level of detail with which the author draws its long-ago setting. Maps detailing each of Thomas’s journeys are inserted into the text, and information about how nobility functions, what it takes to be a knight errant, and how to survive while camping in a forest—to name just a few subjects—makes our hero’s world feel vivid and alive. The many fight scenes are especially intricate, and readers interested in the ins and outs of combat will find the book particularly fascinating.
Ultimately, this book successfully immerses readers in twelfth-century England and all its nuance. Fast-paced and full of historical detail, A Wandering Warrior will satisfy readers looking for the daring and excitement of a classic adventure story.