Another artist term author's may not know ... What is a Pochade?


Many artists draw a sketch with pen, pencil, charcoal, or some other 'dry' medium (although ink is technically wet), when planning an illustration. Generally it's monochromatic (one color), and is intended to capture form, shape, and composition. This is commonly accepted knowledge, even by non-artists.
A term most non-artists, or even many working artists, may not know is pochade.
A pochade is a french word for a sort of sketch, traditionally with paint, rather than a 'dry' medium. It's usually small, often pocket sized, but can also be a full sized version, based on the final work's planned size. The main reason for an artist to use a pochade vs a sketch, is a pochade utilizes color, tone, and shades, though in more of a rough manner, than the final piece will be. Sort of like a storyboard, but in color.


Painters will often create a pochade when painting a landscape, or some other subject, that can't be controlled and brought into the studio. Say the artist wants to paint a sea scape, where the setting and lighting changes by the second? Today, most would use a camera as their pochade medium. But before camera's, what they'd have had to do was capture the essence of the scene, the mood, colors, hues, and tones, in a rapid way. Then take it home and allow the mind's eye to remember the rest for the actual work.
As an artist, I have experienced a magnificent sunset that I had hoped I had captured with my camera, only to find the colors to be dulled and lifeless, once developed. Even today, a pochade would have done me more good than a camera.
Known more commonly is a pochade box. It's an artist's tool that folds open into an easel, while carrying a modest amount of paint and supplies, intended for use in the field. 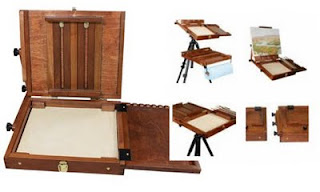 Here is a question to make you ponder, though ...
If an artist, while planning a painting makes a small, colored pencil or marker version of the final piece, is it a sketch or a pochade? In my opinion, if the intent is to capture the various colors and tones, more so than shape or perspective, I'd say yes, even though it's a dry medium.
What's your opinion?

Art Director & VP of Operations
4RV Publishing
Posted by Aidana WillowRaven at 8:00 AM